To quote William Osler, the renowned physician of the late 19th century, he said,  “There is no more difficult art to acquire than the art of observation, and for some men it is quite as difficult to record an observation in brief and plain language.” He also said, “The value of experience is not in seeing much, but in seeing wisely.”

Medicine is replete with signs for innumerable conditions, ranging quite literally from –“The womb to the tomb.” And most of us, grey younger or grow bald faster or wrinkle earlier in the process of learning these signs and their implications. There are many that you see everyday in your patients and your heart does that somersault to let you know you clinched it, but there are a lot that you never get to see. They remain in your rot memory and fade away one day.

But today, what caught my was the serenity in the word “signs”. It did take me sometime to move away from “science” to ponder over “signs.”Amidst the green woods and the flowing stream, finding a sign saying “TRAIL” speaks a thousand words in my mind.

An anecdote I remember distinctly at this point, is one that I read not long ago, about a man called Gideon! I am not sure how many of you are aware of him, but he comes up in biblical reference as a wheat thresher. Apparently, he was saving food secretly in a time of severe oppression for his family when he encounters an angel and is chosen to fight for his nation against a mighty army of strong and chivalrous men! He just had to pick the weapons and fight..but he chose to confirm from the angelic being that it was indeed what he was seeing and hearing! Further, there is mention of him asking God directly for a sign to show he would be victorious in the battle! (I suggest you read the version yourselves for the joy of it. It is encouraging!) He asks for dew on the ground surrounding a dry shawl first. And than a wet shawl on dry ground. And so, he believes he is chosen to fight and win the battle, which he does.

This idea of relying on signs from the Almighty is prevalent since time immemorial. The Hindu mythology quotes innumerable instances of deities and demons relying on signs. The practice continues to be followed till date to rely on planetary positions and star alignments for performing rituals or for astrological purpose. The Persians cast lots to decide war and the outcomes! The Egyptians are known to have relied on astronomical signs as well. And so on.

Even Christopher Columbus relied on signs from people of the new culture he encountered during his voyage. To quote, “As soon as I arrived in the Indies, in the first island which I found, I took some of the natives by force, in order that they might learn and might give me information of whatever there is in these parts. And so it was that they soon understood us, and we them, either by speech or by signs, and they have been very serviceable.” And this as well, “The Indians on board said that thence to Cuba was a voyage in their canoes of a day and a half; these being small dug-outs without a sail. Such are their canoes. I departed thence for Cuba, for by the signs the Indians made of its greatness, and of its gold and pearls, I thought that it must be Cipango.”

As time passed, the early and extinct creatures left imprints of their fossils as a sign of their existence, adding to our anthropological knowledge. ‘The Early Man’, as we are taught in school, chose to leave signs and symbols engraved in his habitat to enlighten us today of what their life was and, look, how much we have changed!

Jane Goodall mentions, “Chimps can do all sorts of things we thought that only we could do – like tool-making and abstraction and generalisation. They can learn a language – sign language – and they can use the signs. But when you think of our intellects, even the brightest chimp looks like a very small child.”

And than the language of signs and symbols for those with special needs. Every region has a dialect of its own even in the special language and its not less than an art to learn and teach them.

In fact, our everyday life is so full of signs – there’s traffic signs, post office signs, metro signs, airport signs, restroom signs, restaurant signs, etc etc etc. Most significant today is the signs of changing climate! You live in the city and all the time there are signs telling you what to do and billboards trying to sell you something.

Would we able to function without signs in our everyday lives? I sit and imagine, how would it be to drive without knowing the traffic signs? Would i actually ask around for restrooms? Would we really know how much longer is the distance to the destination without that milestone sign?

Worth pondering isn’t it? Maybe, with that hot cup of chai in your hand and that furry creature cuddling by your feet, you would like to ponder, signs have survived the test of time and the evolved to more meaningful impressions. Words are but the signs of ideas.

And as I watch that ‘TRAIL’ sign in the picture, I am reminded, “No memory is ever alone; its at the end of a trail of memories, a dozen trails, that each have their own associations” – Louis L’Armour 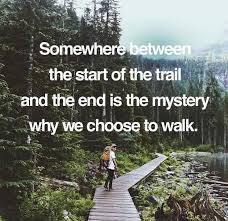